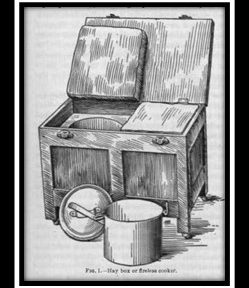 What is thermal cooking? Well it’s like using a slow cooker, but it does not use electricity at all and all the magic happens inside the insulated pot. The short and sweet of it is that food is heated to boiling for a period of time 5, 10, 15 minutes and then put into an insulated structure. The interior covered pot will retain all the heat and the food will slowly continue cooking for several hours.This cooking concept is not new. While doing some research I found a newspaper article from the late 1890’s describing the same method. I also found a drawing in the book Experiment Station Work, XLI from 1907. If interested in reading the article it can be found over on the Internet Archive.

Well my first thermal cooker was not made from wood but the concept is the same. I was able to duplicate the method using a lidded pot and a plastic cooler. Considering the cooler took up so much counter space and the hot pot warped the plastic on the inside of the cooler I finally decided to purchase a small crock pot sized thermal cooker from Amazon.  I do not recommend trying this cooking method with your favorite $200 cooler.  If using a cooler I would use one that you or your family won’t be upset if the inside of the cooler distorts from the heat of the metal pot.

This method of cooking is very simple to use and there is no worry from leaving an electric appliance plugged in all day.  Here is a look at a fireless thermal cooker from 1910 which was produced and sold by Acme.  Wonder if this is the same Acme that was famous in all the Road Runner cartoons? 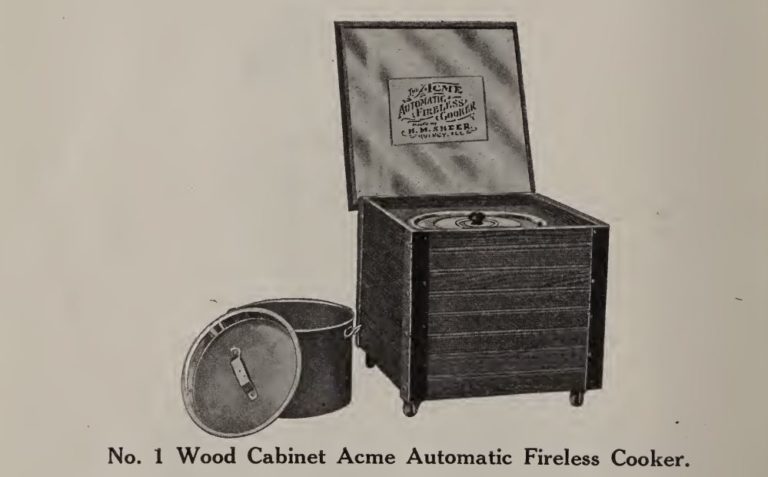 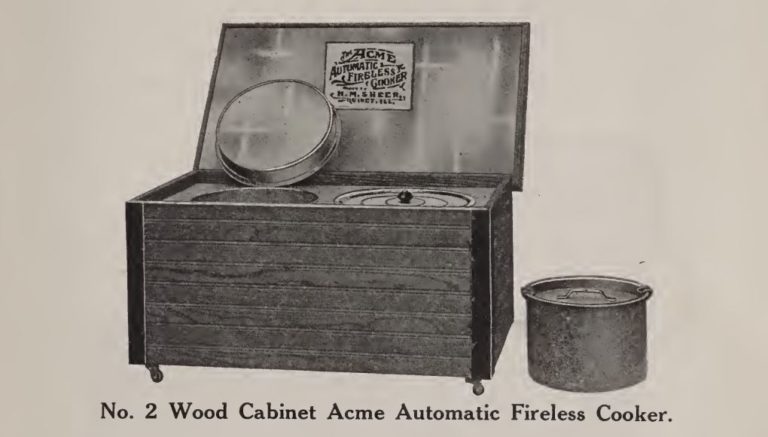 And for those very large families… 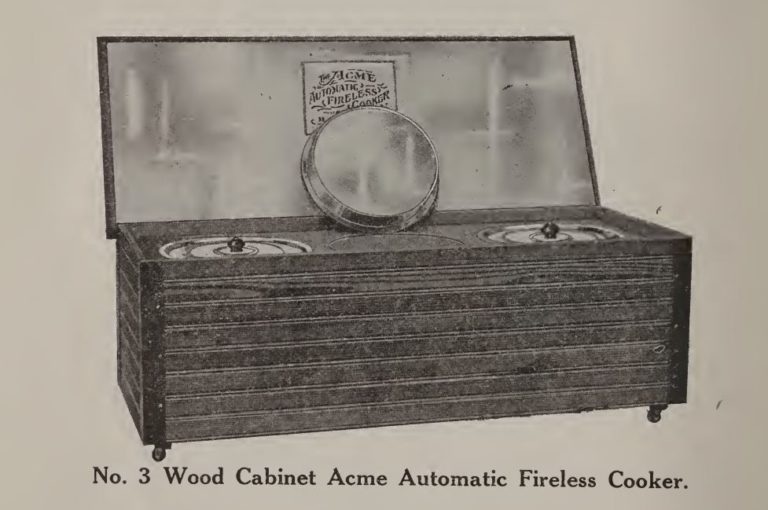 Check out this 1940 instructional film showing how to make oatmeal porridge using a hay box. Produced by Verity Films for the Ministry of Information.

Save money and save time using this method of cooking.  The past few days I’ve tried a couple of soup recipes and can say that I’m really pleased with how they turned out.  The most important part is that the soups and stews work best when the pot is more than half full.  The more food that is brought up to boiling the longer it will hold its temperature in the cooker.  When using chunky meat and vegetables I bring the mixture to a boil and let boil for 15-20 minutes.  This way everything is heated all the way through.
For these recipes I’m using the Tayama 7.5Q Thermal Cooker, Warmer in one,Save Energy Cooker (NVC-7020) By C&H that I purchased on Amazon. 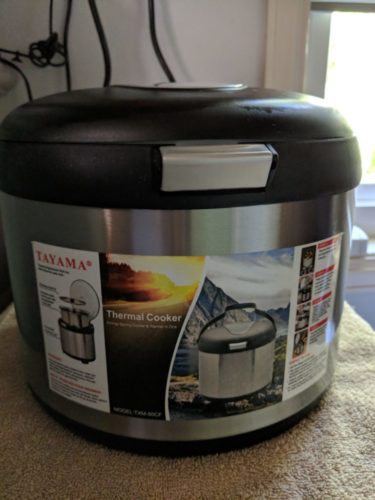 The first recipe I tried was my own take on a chunky chicken soup. It’s more like chicken and dumplings, but without the dumplings. 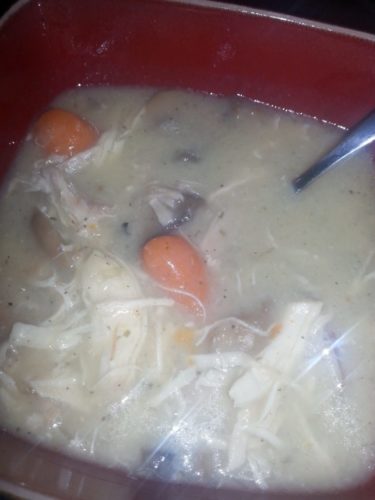 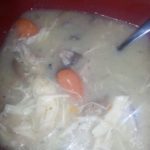 Then again then last night I did a venison vegetable soup. 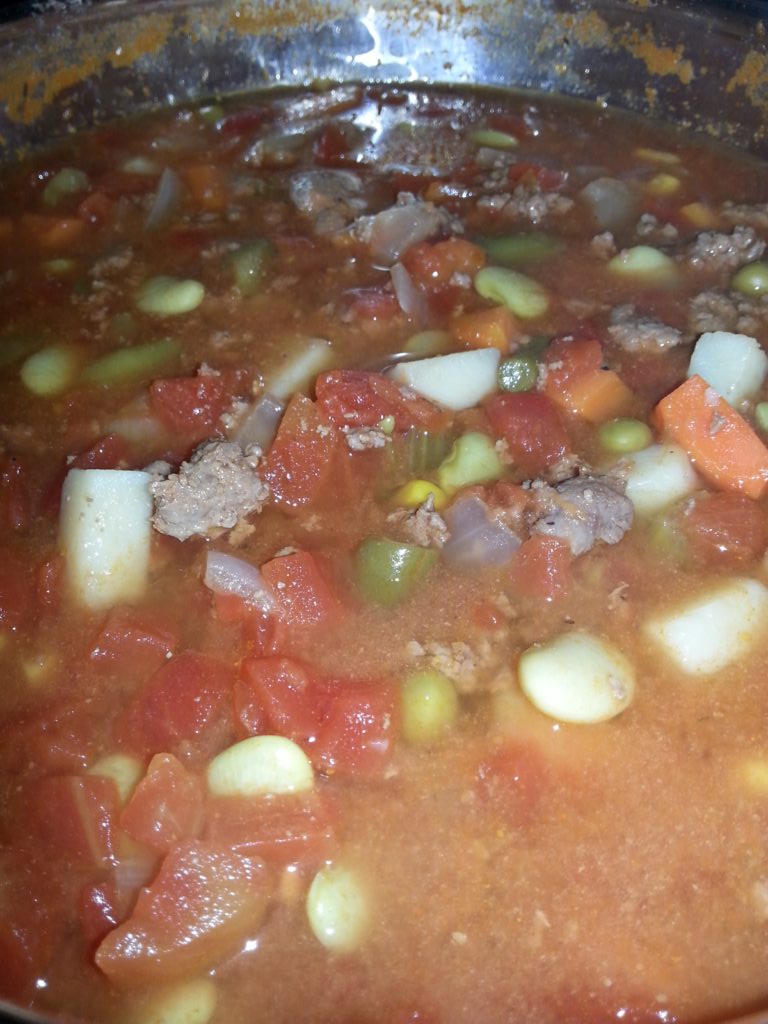 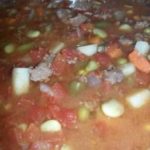 The fun part is that once these soup mixes get heated up and placed into the cooker there is nothing left to do. After 4-6 hours dinner is ready! On the plus side I have plenty of soup that will end up in the freezer since I made so much! I put 4 quarts in the freezer for later this year!

Remember that this method takes time to cook, so start early!