There is a cold going around our area and it has come home to our house.  I’m not feeling it yet but the other half of the grove is under the weather.  Stuffy, sneezing, and all around miserable feeling.  The modern routine of over the counter (OTC) medicines are being used but I thought I’d try adding a little extra into the mix.

Online and in the local pharmacy they are really pushing this new OTC named Sambucol Cold and Flu.  I’ve also heard from a few friends that they’ve been making their own version of the remedy at home. The following is from 1865. It is interesting but I think I’ll use my recipe below. 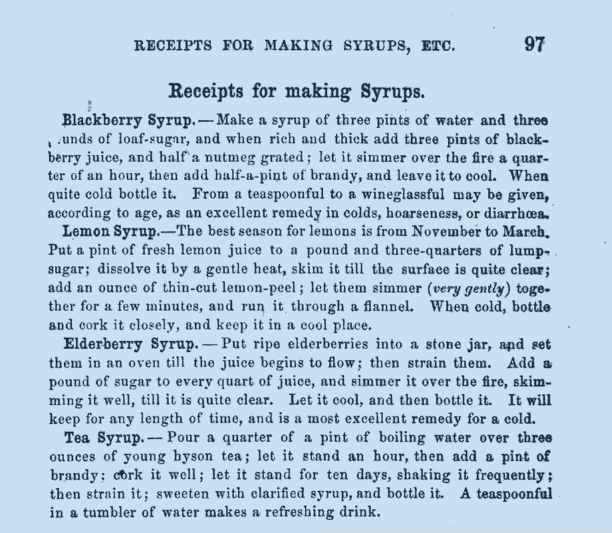 After a little research I was able to find several mentions of using elderberry syrup as a “most excellent remedy for a cold”.  The following recipe does deviate from the recipe above but the concept is still the same.  Let us get all the goodness out of the berries and make a concentrated liquid.  Back then they added a lot of sugar, but with this recipe we will be using honey.  Cooking it longer will also thicken the syrup.  A few of the other syrup recipes look interesting too.  Especially the Tea Syrup!

We’re going to give this remedy a try and fingers crossed that the cold passes sooner…one hates being sick. 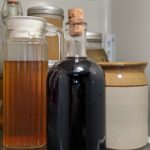 Updated version of an elderberry syrup.  This recipe takes an old recipe and completes the process using an Instant Pot.  Elderberries are a good source of  nutrients, which include vitamin A, vitamin B, vitamin C, carotenoids, amino acids, and flavonoids. Elderberry juice is also rich in certain essential minerals such as potassium, calcium, phosphorus, and several anti-oxidants.  I am not a doctor so any advise in this recipe if from research.  Please do your own research before ingesting any new foods.Adults:  Take 1 Tablespoon of syrup daily when healthy.  Take 1 Tablespoon every 4 hours when feeling ill.  Good for colds and flu.
Author Pam