So, what did I do this week? Let’s see. I went down to the auction bright and early Wednesday morning, and took some notes on what things were selling for. If your looking to score on 3 pallets of 10-15 desktop computers with monitors and keyboards for anywhere between $100 to $300, then that’s the place to be. Now that doesn’t mean they all work, so it’s kind of like a lottery… you might hit, you might not. There was a “lot” of 20-25 laptops w/ 9 cases of new laptop bags that looked more promising, but that one went for $1,800.

I won’t say I wasn’t tempted… but I held out for my desks to come up for auction. 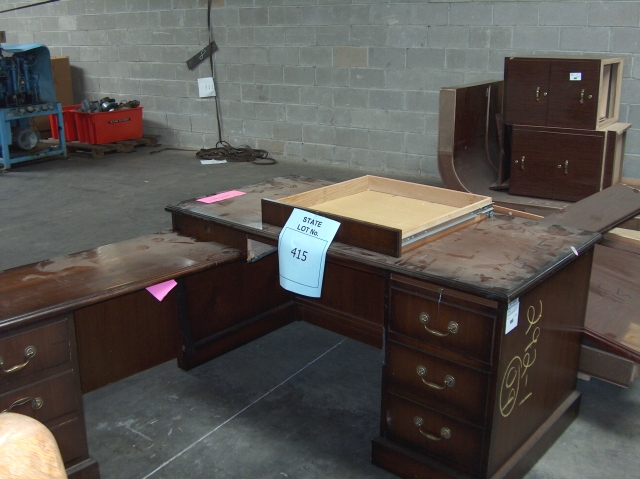 Well around 1pm it comes time for the two desks that I want to come up for bid… considering how people were going at it over the other furniture I wasn’t sure how this one would go. Well get this…. I won my auction for just $10. Not bad…now once we pick them up I’ll have to decide where to put the one I want… the other one will most likely go downstairs. Yeah.. they need some cleaning, a little scratch covering and general TLC.. but I’m still proud of ‘em!

Hmmm… what’s in store for this weekend? I’m really not sure. The raised garden beds need more soil now that they’ve settled after all the rain, but it’s supposed to rain sometime tomorrow (I think). I have two more Security quizzes to finish, but that shouldn’t take too long, and a chapter to read in my Disaster class. Oh.. and we can’t forget about In Justice coming on tonight. There’s something about that show that I really like, and I don’t know if it has anything to do with Twin Peaks guy or not! I guess once day we’ll have to have a Twin Peaks marathon day… now where are those tapes at, I know there around here somewhere.